Apple computers have many useful features and capabilities. One such feature is the built-in hardware test. It can be used to self-diagnose a computer malfunction, find a non-functioning component, and figure out the cause of the failure. A performance test is no substitute for a visit to a service center, but in most cases, it is useful for regular users. In this article, we’ll show you how to perform a Mac hardware test in just a few minutes. You can do it on any MacOS computer, including iMac and Mac Mini.

Why Do You Need Apple’s MacBook Hardware Test?

All modern Macs have a built-in utility for diagnosing computer hardware. It lets you check most nodes and components and detect malfunctions or non-working items on the device. For example, with hardware check mac you can test the motherboard, graphics card, processor, RAM, disk storage, and other components. It is about checking their hardware status. Any malfunction can be identified with apple diagnostics on Mac.

The first version of the program (Apple Hardware Test) runs on Macs that were released before June 2013, while the second version (Apple Diagnostics) is used on newer models.

Such tests can detect problems with most of Mac’s components. The system polls the drives, RAM, wireless modules, power controller, battery, and other computer components one by one for errors.

​​Recommendation. Have your computer diagnosed every few months, or before you buy a used device from your retailer. This will help detect hidden defects, electronics problems, or software errors. It can be difficult to detect such problems any other way. 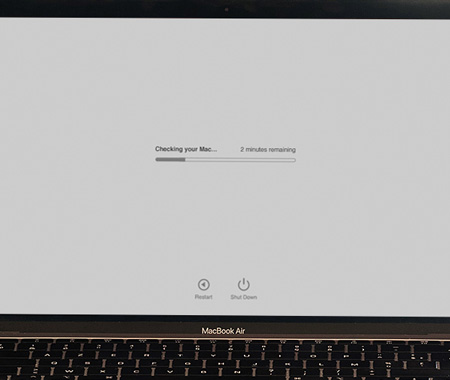 Some of the problems you found can be fixed by yourself. For example, if there is a battery error, you can reset the System Management Controller. We’ve already covered how to do this on your Mac. Some other errors can be fixed in the same way. But if you have critical problems, you should contact a service center.

Preparing for the Apple Hardware Test

Instructions for Hardware Test on Mac

To perform MacBook system software diagnostics, you need to turn off your computer completely. Press the Power key and press the D key while booting up. As soon as the welcome screen appear on the screen, release the key. 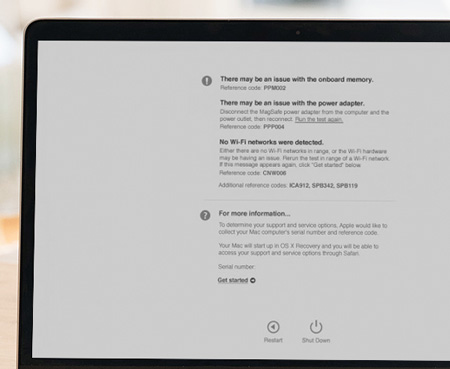 At this step, you will have a choice between an accelerated and a full system diagnostic. To run a full diagnostic, you should check the box next to Run the advanced test. After completing the software diagnostic, you will see the test results and the codes of possible faults.

You may want to use the following keyboard commands to better control and run Mac hardware diagnostics:

You should periodically run a Mac hardware test. The diagnostic will take only a few minutes, but you will be able to determine the state of the device and detect possible failure right away.